Brandeis Consulting
Why are scalar UDFs so slow?

Why are scalar UDFs so slow?

When loading data from source systems, there are requirements in SAP BW that are often repeated at the field level. This includes, above all, logics for cleaning up and processing the data, such as:

The following listing shows a few examples in the source code:

Typical expressions in the field list of a transformation routine

What all these requirements have in common is that they

The well-known DRY principle should actually come into play here. So that you don't repeat the source code all the time. In the field list, the scalar, custom functions (UDF) are available for this purpose. Until recently, these were not an issue for the transformation routines in the BW, because they can only be created with the AMDP Framework since AS ABAP Release 753 ((SAP documentation for AMDP functions)). But scalar UDFs would be ideal for precisely these requirements. This ensures a uniform implementation. And in the source code, one comes from a technical description of the expressions to a technical view:

Outsourcing the expressions to a scalar UDF

The outsourced functions look much more elegant. And they are also superior from the point of view of maintenance. For example, if another profit center appears in the list, there is exactly one feature that needs to be adjusted. Using the example of ZCL_PROFCT=>TO_PRBY I show such a scalar AMDP function:

The example shows that the function is just a simple "shell" for a CASE expression. By the way, outsourcing to the ABAP world also makes it easy to write UnitTests for the functions. Since the functions in the database are only generated from the ABAP on the first call, UnitTests are also suitable for this purpose. ((I deliberately do not use data items generated by BW-InfoObjects to minimize dependency.))

As elegant as the outsourcing of logic in UDFs is, the concept is unfortunately not to be used for large amounts of data. This is because the UDFs have a significant influence on the duration. I would like to show this in another expression from the example above:

This simple expression converts an ABAP DATS value into a SQLScript date, which is then output to a yYYYMM string. This corresponds to the format of the popular InfoObject CALMONTH.

For this purpose, I create an AMDP UDF according to the above pattern:

I made two queries in the SQL console on a small BW table with about 3 million entries: one directly with the printout and one with the function call.

The runtimes are so different that you actually have to assume a bug. Because the complexity of the Besipiel is minimal. With less complexity, I don't need UDF anymore. What I find amazing:

In order to fully document the whole thing, I also did the analysis with PlanViz. 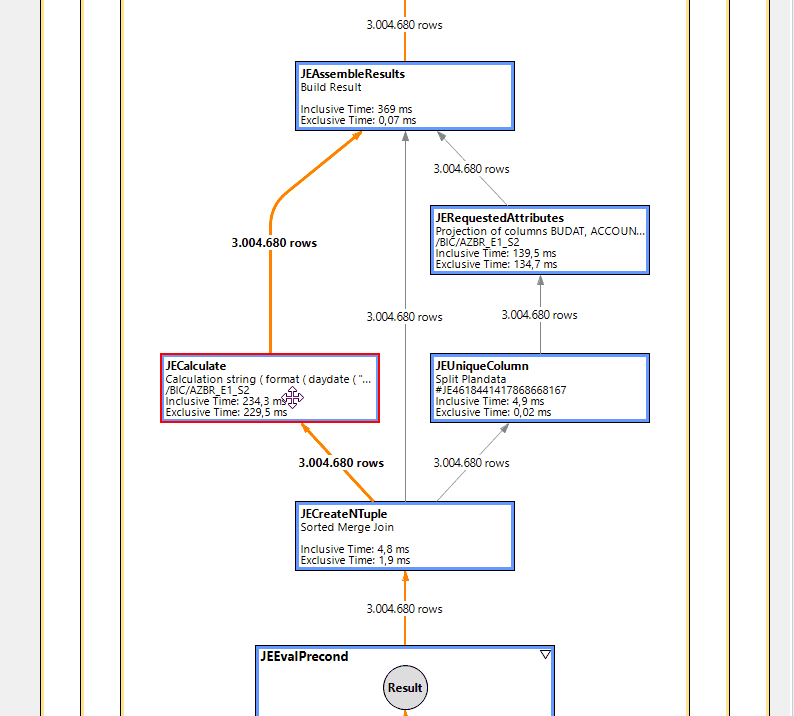 PlanViz of the query with expression 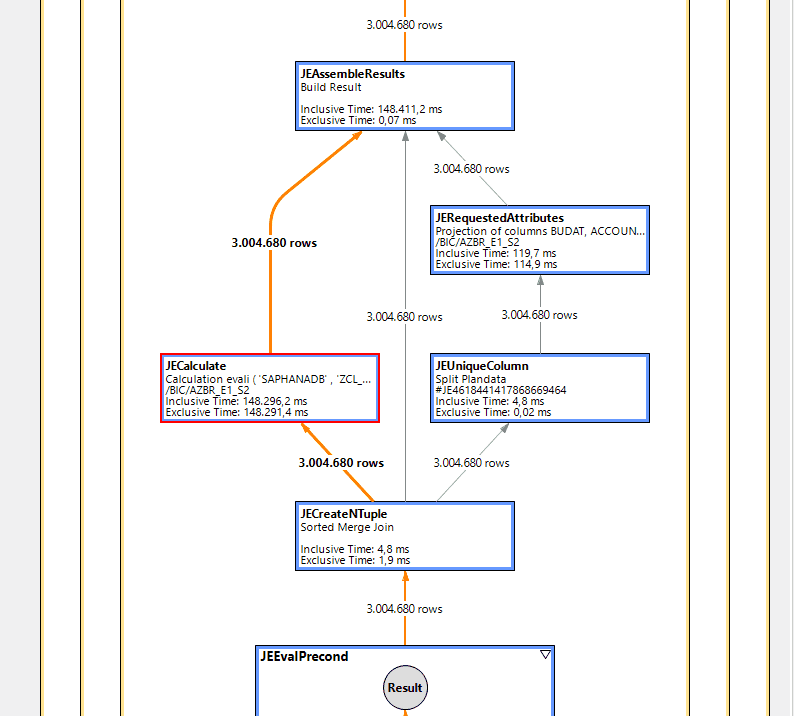 PlanViz of the query with UDF

It is clearly visible that the same execution plan is broadly chosen. But the runtime of the one, red-marked JECalculate node contains the entire runtime for the UDF call. This should at least be parallelised.

Why is that? Do I have a misconception in my example? Can I still optimize this? Or are the UDFs just so slow. While researching forums, I have seen that I am not alone with my problems. There are also several ways to slow down the system with unfavorable functions. (((Examplesof unfavorable UDF function in memory problem)) ((Multiple call of scalar UDFs with multiple return parameters)) ((No parallel execution of multiple UDFs))

In any case, there is still great potential. At least for simple expressions without querying other DB tables.
I realise that there are also complex requirements that cannot be reduced to a single expression. But then at least parallel processing would be desirable.

Update of 8.10.2020: I still have a bit of a discussion about performance optimization today. I also stumbled across the HINTS. The HINT (INLINE) is supposed to trigger exactly the desired behavior: Optimization should be done globally. But unfortunately there is nothing in the documentation about functions. Everything refers to procedures. And this is also in line with my observation: the hint brings absolutely no change. It remains slow.

Lars Breddemann has taken up the topic in his blog and has made his own measurements in this area. Some of these measurements I can relate to, but others I cannot. I suspect the differences are related to the version of the HANA database being used. All my measurements have been done on a BW/4HANA 2.0 SPS0 system with the HANA 2.00.036.00.1547699771. Lars probably used a newer version of HANA. Here are my comments on individual points:

The worse performance of DETERMINISTIC functions was confirmed by Lars. He recommends not using the DETERMINISTIC keyword, since it almost always leads to a non-optimal execution plan.

This also improves performance for me, but the scalar UDF still remains slower by a factor of 10. Here are the two implementation plans for it: 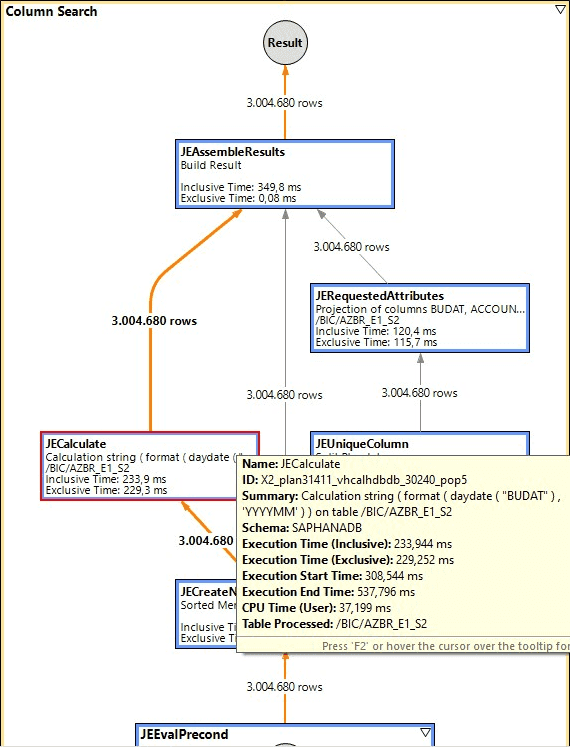 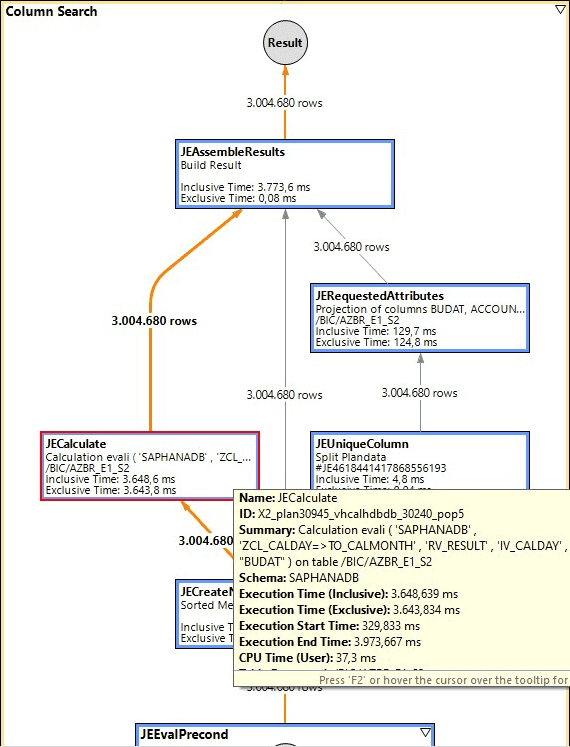 For 3million records, that's about 0.35 seconds vs. 3.7 seconds. The difference remains too great.

Another difference is the engines used. In Lars' case, EXPLAIN shows that both Row and Column engines are used. For me, only the column engine is involved.

On my system state HANA 2.0 SP03 the performance of scalar UDFs is already much better after omitting DETERMINISTIC. However, it is still a far cry from using the expressions directly in the field list of a query. Since Lars has different observations on some points, there are obviously also dimensions that we have not considered so far. Probably the HANA version plays a big role in this.

Since I don't have HANA 2.0 SP04 or SP05 available, I moved to SAP HANA Cloud for my next measurements. In the process, I initially noticed considerably shorter runtimes. However, since it's a completely different hardware, I can't make any valid statements about how much of it is the HANA version.

But what strikes me about the execution plans is that the system optimizes much more cleverly here. The queries used above do not process all 3M records, as this is not necessary for the output of 1000 records in the console. ;-)

If you perform the SELECT query with DISTINCT, then the system is forced to process the entire data set. However, this leads to additional work in a JEPreAggregat node, which then takes care of the GROUP BY. To keep this effort from dominating, I only looked at the one column:

The difference between the scalar UDF and the direct use of the expressions seems to melt more and more.

I will provide more detailed measurements in this article soon.