This cheat sheet contains a comprehensive overview of syntax, examples and descriptions of CDS ABAP. We also use it in our CDS ABAP training at Brandeis Consulting.

This overview shows only the most important aspects and is not complete. For details please follow the links to the SAP documentation or the linked sources. The examples refer to the slides from the training.

With CDS ABAP, the release of the ABAP server basically plays a major role, as there is still a lot going on here. The examples were created on release 7.53. When looking at the documentation, you should always choose your exact version level.

Below the line are references to the

The DDL file and the CDS entity usually have the same technical name. The SQL database view must have a different name than the CDS entity, since both are in the same namespace.

With Release 7.55, a new object type has been added to the classic CDS View, the CDS View Entity, which has no SQL database view. It is recommended by SAP to use these objects if you are on the appropriate system level.

Keywords in CDS ABAP are either

Identifiers of tables, views or columns are not case-sensitive. They may be a maximum of 30 characters long and consist of letters, numbers, underscore and slash.

Comments can either start at the end of the line with a double slash // or be placed as block comments between /* and */.

Whitespace doesn't matter much and is primarily used for formatting as long as the semantics are clear.

Annotations are used to enrich the source code with meta information. They are relevant for the generation of the views on the one hand and for the consumers of the CDS ABAP objects on the other hand. Each framework has its own annotations for the CDS views, e.g. :

In this poster, the most important annotations related to the current topics are mentioned. The complete list with over 800 annotations can be found in the SAP documentation.

Values of an annotation

The syntax described here is largely identical for CDS Views and CDS View Entities. There are two important differences in view entities:

The field list consists of expressions. These are mostly field names of the sources. However, there may be other elements in it as well. The following are possible:

The expressions can be nested within each other. For example, a parameter can be used as a comparison value in a CASE expression.

The individual fields are separated by commas. If a field name is not referred to, an alias name assigned with AS is mandatory for the field. The keyword KEY marks the key value.

In the CDS entities you can refer to the data elements of the Data Dictionary or directly to the ABAP data types. The data types must always fit exactly, otherwise there will be error messages when activating the CDS ABAP object. The SQL function CAST is used to convert the data types:

The ABAP data types are specified with abap.<datatype>, for example

Depending on the data type, the <length> and possibly also the number of <decimal places> must be specified in parentheses. If the data type of the <expression> is technically identical to the specified data element, you can specify the addition PRESERVING TYPE.

There are a handful of session variables that can be accessed in CDS ABAP.

So far there are the following variable names, which largely correspond to components of the SY or SYST structure in ABAP:

In CDS ABAP the arithmetic operators for addition (+), subtraction (-) and multiplication (*) work as you would expect. However, the division differs from this. Basically, a whitespace is required before and after the division operator (/).

The complex CASE expression (aka 'searched case') evaluates N independent conditions. The first case to be evaluated to TRUE, returns the result:

If no condition was evaluated to TRUE, either the value from the ELSE clause or NULLis returned.

Associations can be used to describe the relationships between CDS entities. They define a JOIN that is executed only, if the fields are retrieved from the associated entity. These queries are created with so-called path expressions and can run across multiple CDS entities.

The names of the associations always start with an underscore. They are included in the field list and thus they are available to the users of the CDS View.

Path expressions can be used to include fields from associated sources in the field list of the CDS view or query on the CDS entity. The path expressions can also go over several levels. It is also possible to add attributes to the evaluation of the associations, for example to filter or to define the join type:

The path expressions can be used in ABAP SQL. However, the syntax is slightly different. Before associations, and as separator between them, there is always a backslash (\). The component is addressed (as usual in ABAP) with a hyphen (-):

NULL in CDS ABAP and ABAP

In the database there is the pseudo-value NULL, which signalizes the absence of a value. This is translated into an initial value in ABAP. This can lead to unexpected situations when aggregating, since two groups are formed - one for NULL and one for initial values in CDS ABAP - but both are initial in ABAP.

You can catch NULL values with the SQL function COALESCE(<value1>, <value2>), because then this function returns the 2nd value.

A normal comparison with NULL always results in the logical value UNKNOWN. Thus, such a comparison is never valid in a WHERE condition. That is why the predicate IS (NOT) NULL is needed.

Be careful when using blanks at the beginning or at the end of strings (STR). These are partially removed. A look at the documentation is essential here!

The functions in the CDS ABAP are the same as those available in the OpenSQL in ABAP. The data types play a major role in the SQL functions, which is why their abbreviation is always prefixed, e.g.:

The names of the CDS ABAP SQL functions start with the data type.

Parameters can be defined for a CDS ABAP View, which are then used as an expression, e.g. for calculation, as a comparison value or as a function parameter.

Default values only work in a few frameworks:

As with the generic delta, a delta can be formed using a timestamp field. Optionally, a safety interval can also be specified.

Automatic change recording is possible on systems from SAP S/4HANA 1909 FPS01. For more complex scenarios with JOINs, explicit mapping is required. Details in the blog of Simon Kranig - a very good read.

CDS Table Functions are views programmed in SQLScript. They are based on an AMDP function encapsulated by a CDS ABAP object. 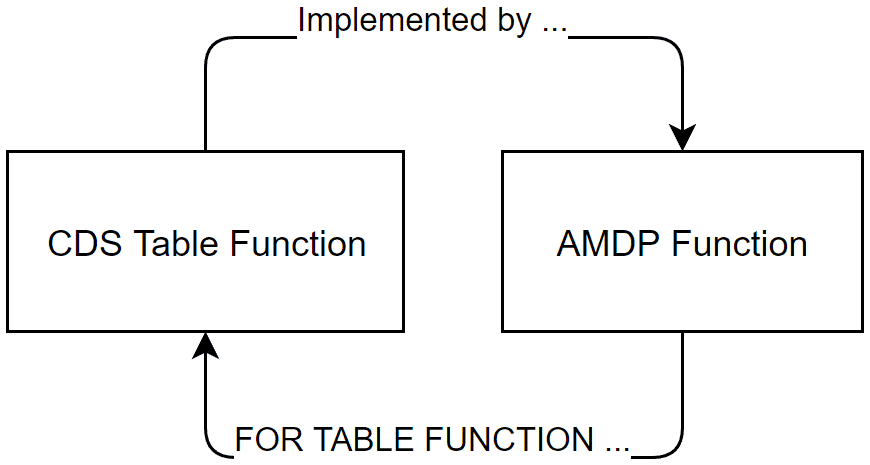 CDS queries are based on CDS InfoProviders with the annotation @Analystics.dataCateogory: [#CUBE | #DIMENSION]

They form a transient InfoProvider named 2C<SQLView Name>. They contain the complete semantic information of the data model that the CDS queries are to use later.

CDS Cube Views are the basis of key figure reports. You can associate additional CDS dimension views to enrich the attributes and texts of features.

The CDS Dimension Views provide attributes for a feature. These attributes can be time-dependent.

The CDS Text Views provide the language-dependent texts for fields.